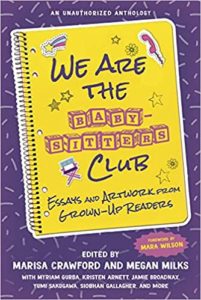 Lucia Aniello, director and executive producer of The Baby-Sitters Club Netflix series, says: “Turns out there were a whole lot of us obsessed with the Baby-Sitters Club! We Are the Baby-Sitters Club is the ultimate companion guide for a generation of devout superfans. This book revisits the beloved series through grown-up eyes—but never loses the magic we all felt the moment we cracked open a fresh new book. BSC forever!”

And Melissa Febos, author of Girlhood and Abandon Me, says: “More than a book about a series of books, it is an ode to the child readers we were, and the ways we have learned to name the experiences we couldn’t find written.”

Learn more about the book at Chicago Review Press. 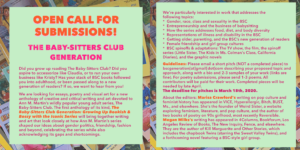 3/4/2020: OPEN CALL FOR SUBMISSIONS! I’m at work on an anthology of writing and art related to The Baby-Sitters Club — my co-editor Marisa Crawford and I are looking for a few more pieces to round out the collection. Interested? Pitches due 3/18.

In 2017 I edited a column series on Entropy on issues related to names and naming. This series is a reboot of the column I edited for the Land Line Quarterly from 2011-3. (Art by Kristen Stone.)

Call for Submissions
#1: Fursonas by Tim Susman
#2: Bout My Gov’ment Name by jayy dodd
#3: Is My Name Queer Enough and (Why) Do I Care? by Kristen Stone
#4: Legal Names, Family Names by River Encalada Bullock
#5: How Naming My Family’s White Supremacy Led Me to Change My Own Name by Jessie Daniels
#6: Patron Saints by Julia Dauer
#7: Contrapuntal Name Tag by K[EI] Kaimana
#8: Bilingual Loneliness by Ela Przybylo
#9: But Alcy’s a Girl’s Name by Alcy Leyva

I edited the third volume of The &Now Awards, an anthology of the best innovative writing 2011-2013. Available for order here!

These &NOW award anthologies … read like a directory for the US (and otherwise) avant-garde writing milieux. … not only is the &NOW anthology a great way for the reader to find new writers and works, it is a great resource for writers as well, in a way a compendium of potential markets, MFA programs, grants and awards to keep an eye on for future endeavors.

There are emoji-poems (emoji’d and translated) in this collection – so I’m pretty sure that invalidates any criticism OR praise and insists that you just go take a look. If you’re willing to try something new or push your boundaries, this is the way to do it.

With Miodrag Kojadinović I co-edited one of seven issues of Birkensnake 6 as part of an experiment in collaborative literary journal editing. We were teamed up with designer/illustrator Walker Mettling. The editing portion of the project occurred between July 2012 and July 2013; design between July 2013 and now. All seven issues are available online. Print versions of the issues were available only through the Birkensnake 6 tour, which opened in Pittsburgh on November 1, 2013 and visited Chicago, Oakland, Seattle, and Denver, possibly a few other cities, in the coming months. Check the Birkensnake 6 Facebook page for updates. 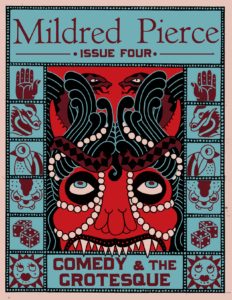 From 2005-2011, I co-edited and co-published the print arts and culture magazine Mildred Pierce with John Bylander.