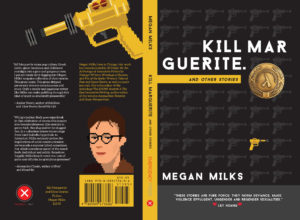 My first collection, Kill Marguerite and Other Stories, was published in 2014 by Emergency Press. In 2015, it won the Devil’s Kitchen Award in Fiction and was named a Lambda Literary Award finalist in the LGBT Debut Fiction category, and in 2017 it was recommended for the James Tiptree Jr. Award in Feminist Science Fiction. Kill Marguerite got nods on The National Book Foundation‘s Pride Month 2015 Reading List, Necessary Fiction‘s Year-End Recommended Reads list, Autostraddle’ “Ten Books for Queers and Feminists to Read This Spring“, Bluestockings Magazine’s Feminist Summer Reading List. and Strange Horizons’ 2014 highlights. Available online at Powell’s, Amazon, and select bookstores.

Kevin Brockmeier includes “Twins” on his Fifty Favorite Stories list over at The Masters Review.

Autostraddle names Kill Marguerite one of “Ten Books for Queers and Feminists to Read This Spring“!

This makes it seem like Kill Marguerite is an entire collection of stories about slug sex and excrement, but it’s not. Some of the other stories are intertextual puzzles in the best sense, intensely creative in imagining possibilities beyond a heterosexual, able-bodied, white, and affluent vision of life and thus serious about what it intends to interrogate: heterocentric romance narratives, compulsory heterosexuality and its attendant forms of femininity, aspects of affluent white teen girlhood. As a writer, Milks is able to combine the sly humour and farcical, almost carnivalesque aspects of fantasy with some heavy themes because she takes both her work and her readers seriously.

Brit Mandelo at Tor, as part of a Queering SFF series:

Kill Marguerite and Other Stories is quite a ride. It left me bewildered and a touch grossed out…but also thoughtful, considering pieces like the short “My Father and I Were Bent Groundward” long after I finished them. It’s a look into the experimental end of what queer writers are doing at the moment: messing around with text, with narrative, with identity and self-referentiality and aggression, with the history of bizarro fiction and the hyperreal.

This is an area of popular culture which literature rarely draws upon — possibly because of its association with young girls, whose tastes are always particularly open for mockery. That Milks sees it as important would be itself be enough to make me love her work. That the collection deals with it in this way — smart, queer, perverse, inter-textual—means even more. The stories in Kill Marguerite are unsettling and often unpleasant but they feel like a gift.

Milks’ facility with formal innovation is matched by an understanding of the pressures that gender and body politics place on a text. Her polymorphic fifteen-story collection refuses to re-size and -shape its parts to accommodate the all but compulsory single-climax narrative. Conceptually, this is Milks’ way of depicting variations of human anatomy and incongruities between the tripartite categories of sex, gender and desire. And how refreshing this decision is, flying at the craggy faces of those who believe their capacity to enjoy a story is compromised by an unconventional structure. The shape-shifting stories of Kill Marguerite don layers of disguises from videogames, Greek mythology, cannon literature, botany textbooks, YA fiction, and porn.

I read the title story of this totally awesome experimental collection last night, drunk before bed, and fell in love…

Every story has immediate impact and her prose will make you tremble, quiver, then laugh out loud. She writes one of the most incredibly unique love stories in “Earl and Ed,” a relationship between a wasp and an orchid, deftly balancing the boundary between the visceral violence of physicality and the chaotic juggernaut of desire- a theme that resonates through many of the stories.

Milks’ stories … draw influence from cultures both high and low, from Homer and Joyce to video games and teen magazine columns. They never sit quietly, but rather unsettle convention and defy expectation. In fact, the moment you think you know what’s happening, the story opens into an unexpected black hole, thrusting you into a passage that devours and reconfigures expectations.

It’s … surprising, given the vast range of modes on display, how very well Kill Marguerite maintains itself as a unified work; tracing the veins that run from piece to piece is part of the fun. The consistently disciplined prose does nearly as much to this end as the shared themes, sometimes calling to mind the similarly wry and precise Lydia Davis. This collection establishes Milks as a writer who can do just about anything but who will, one expects, keep doing the bidding of her macabre but humane imagination.

These stories are, in many cases, hard to read (I want to quote directly but I’m unsure if I should). The violence in the eponymous story as a queen bee strips a hapless nerd naked to humiliate her makes me feel physically ill…but what really makes these stories difficult to read are the issues they address because they are essential to talk about.

My Book Notes mixtape is up at Largehearted Boy:

The collection’s title story, “Kill Marguerite,” is a Tori Amos album squeezed into a Xiu Xiu song. Under the Pink trapped in “Boy Soprano”—in that the story stuffs girl-girl conflict into the structure of a video game.

I wrote a column for Lambda Literary as part of their series The Banal & The Profane:

This morning I reread “Tristes Tropiques,” the first essay in Hilton Als’ White Girls, because it makes me want to write. It’s an essay about twinning, about twinship, about the confusion of boundaries in the context of 80s/90s NYC. Reading it, I twin with the text, identifying and disidentifying at each turn. I’m a white girl, question mark after girl. I absorb the essay’s nostalgic turn, its melancholy, its grief. I feel my loss for the city.

My self-interview is up at the Nervous Breakdown along with an excerpt from “Kill Marguerite”:

“Milks.” That’s a funny name. Are you a funny person?

Nope. Not even going to deliver an anti-joke here. But I’m interested in comedy, for sure, especially the comedic grotesque and “stupid” writing. My fiction definitely has a sly side. Lots of deadpan humor, the occasional very bad pun. Plus talking insects, acts of gods, and winkingly insincere morals.

From Lily Hoang, author of Unfinished, Changing, and Parabola:

The stories in Megan Milks’s Kill Marguerite are pure force: they norm deviance, make violence effulgent, ungender and regender sexualities. Each story is a kitsch throwback to back in the day when reading was a fun choose your own adventure, or, these stories are not just carnal, not just animalistic, not just girly: they’re amphibian, our full corporeal tenderized to satisfaction, which is to say—hot.

From Johannes Göransson, author of Haute Surveillance and Entrance to a Colonial Pageant in Which We All Begin to Intricate:

Genre conventions are commonly thought of as restrictive rules, but in these stories Megan Milks shows that these conventions can be agents of perversion, both glaringly porous and ridiculously invasive. Over the course of the book, Milks invokes and employs the genre conventions of fan fiction on, for example, Kafka’s Metamorphosis and teen comedies, then mixes in young adult novels, video games, choose-your-own adventure tales, epistolary novels, gothic tales, family romances, and “traumarama” entries, until this melee of genres interrupt each other, parasite each other, distort each other. The result of this romp is absurd, grotesque, parapornographic, violent, gurlesque, but most of all hilarious in a dead-pan kind of way.

From Alexandra Chasin, author of Brief and Kissed By:

Wittig’s Lesbian Body goes superfreak in this celebration of excess, this inquiry into boundarylessness, this exercise in genre-fuck, this slug-and/or-be-slugged fest.  In a collection whose voices range from hard-boiled to hyperbolic to hysterical, Milks seriously probes the implications of social constructionism: we’ve made a monster (albeit sometimes hot, albeit sometimes queer) of the sexed body, individual and politic.  Somehow, happily, Milks keep it comic too.  Lots of parts and effluvia, no gratuitous grossness!

From Davis Schneiderman, author of Multifesto and Drain:

Megan Milks’ debut collection is a fearless romp through the post-avant wasteland of fictions both Lynchian and Homeric. Milks puts Shelley Jackson’s The Melancholy of Anatomy through a cement mixer, grinding out tales as sure to delight as they radically defamiliarize. Here, Sweet Valley Twins gets a reboot finally worthy of the world their YA books helped to make weird. Milks is a master of the absurd grotesque, and Kill Marguerite is her powerful annunciation.

From Amber Dawn, author of Sub Rosa and How Poetry Saved My Life:

Kill Marguerite and Other Stories mixes pop culture, Greek myth, queer feminism and childhood nostalgia into a gory and gorgeous mess. I got my hands dirty digging into Megan Milks’ sanguine collection of short stories. This prose oozes. This prose dripped perversely into my consciousness and stuck. Only a steady and sagacious writer like Milks can make paddling through this kind of muck so absolutely pleasurable.